Symposium: The 2006 Mexican Election and Its Aftermath 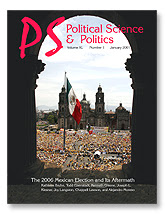 
Beginning in 1994, Mexico set about a project of recreation: it built itself new institutions to watch guard the democratic process. And yet, though this nascent Mexican democracy was borne of Vincente Fox’s election to that country’s presidency in 2000 after seven decades of single-party rule, a viable democracy shows its durability by how close to form it remains when tested and tempered by the will of the people. In light of Andres Manuel Lopez Obrador's wide-spread (and widely covered) populist movement during the 2006 presidential election, can Mexico count on its fledgling democracy?

"The Origins and Rationality of the “Legal versus Legitimate” Dichotomy Invoked in Mexico's 2006 Post-Electoral Conflict"
Todd A. Eisenstadt (PS, Jan. 2007)