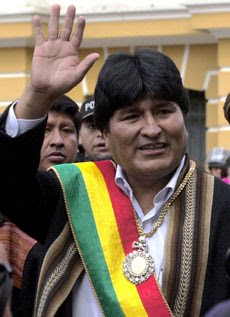 Bolivia's first indigenous president has the most potent life-story of any world leader. But a year after he took office, he governs a country as polarised as ever. Bolivian journalists Roberto Navia and Darwin Pinto tell Ivan Briscoe that 2007 will be make-or-break for the enigmatic Evo Morales.

Unusually for a politician, it was a fashion statement that put Evo Morales firmly on the map of world leaders. Days before his inauguration as Bolivia's president on 22 January 2006 - following his outright victory in the first round of the presidential elections on 18 December 2005 - South America's first ever indigenous president travelled the world, greeting the king of Spain and the leader of China in a striped sweater. The Bolivian president later confessed that he had only worn a suit just once in his life, and that was to play the trumpet in a dancehall.

The rebellious note struck by that first sartorial gesture has not been lost in the year since his inauguration. More so than his Venezuelan ally Hugo Chávez, Morales has waged a battle to bring about profound systemic change across Bolivia in the name of the country's indigenous majority. Protests against his heavy-handed rule and rhetorical venom against the "oligarchy" have risen in tandem. Almost all observers now agree that 2007 will prove a crucial year for the country, while some fear civil war.

A new book researched and written by the young Bolivian journalists Roberto Navia and Darwin Pinto - Un tal Evo: Biografía no Autorizada (Someone called Evo: An Unauthorised Biography) - offers the first unauthorised version of Morales's life. The El Deber newspaper colleagues have dug deep into a virtually inaccessible history so as to trace the roots of his political persona. It is an extraordinary tale, composed of windswept Andean plateaus, aching bellies and low-intensity jungle war: a cluster of hardships through which a football-addicted llama herder becomes his country's greatest indigenous leader.

It is clear, however, from an interview with the authors that - in a process they share with many of their fellow-Bolivians - admiration of Morales is rapidly being tempered by grave suspicion of his leadership. The first year of his rule has secured nationalisation of the country's gas resources - a long-held indigenous demand - and a revenue boom for the state. "We've given an economics lesson to the neo-liberals", vice-president Álvaro García Linera has declared.

Meanwhile, the conflict with the rich, creole-dominated business capital of eastern Bolivia, Santa Cruz, has brought threats of military repression from Morales, and of secession by the protestors. Skirmishes around the region and in other parts of the country are now daily news; clashes in January 2007 between police and protestors in the city of Cochabamba - earlier more famous for popular struggles against water privatisation - have led to deaths and severe injury.

Amid mobilisation for and against the government's huge programme to redistribute twenty million hectares of land to poor peasants, and bitter arguments in the assembly charged with drafting a new constitution in the legal capital Sucre, every deed of Evo Morales and his government is being exposed to ever-closer scrutiny. This political moment gives added value to Roberto Navia and Darwin Pinto's observation of their president.