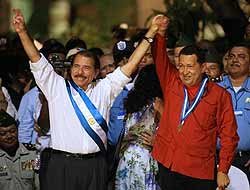 The Nation
by MAX BLUMENTHAL
[posted online on January 19, 2007]

On Wednesday, January 10, Managua's Plaza la Fe was the site of the kind of gathering Nicaragua has not seen since the 1980s, as tens of thousands of people converged to celebrate the inauguration of Daniel Ortega, the 61-year-old former Sandinista comandante and perennial presidential candidate who had returned to power after sixteen years in the political wilderness.

As the ceremony began, a recording of a fiery speech Ortega delivered during the height of Nicaragua's war against the contras blared from the PA system, stirring the crowd to life. Then Ortega emerged, flanked by the lions of the Latin American left, Venezuelan President Hugo Chávez and Bolivian President Evo Morales. The lines in Ortega's face have deepened since he guided Nicaragua through its war against contra insurgents, and his signature black mustache is dyed now, but the scene staged at the plaza was enough to evoke nostalgia for his revolutionary heyday.

Ortega's prominence on the pantheon of the Latin American left was affirmed by Chávez. Fresh from his own inauguration hours earlier, during which he effusively pledged "socialismo o muerte!" Chávez lionized Ortega by lifting a page from Bertolt Brecht. "Men who spend their whole lives fighting for justice are indispensable," Chávez boomed. As he flailed his arms to emphasize his stentorian rhetorical volleys, young men in the crowd reached for their digital cameras, eager to snap a shot of this political rock star in action.

Chávez was followed by the more subdued Morales, ex-leader of Bolivia's insurgent coca farmers' movement and his country's first indigenous president. With his voice barely rising above the chants from the crowd of "Evo! Evo!" Morales pledged that he, Chávez and Ortega would nationalize their countries' industries and bring death to American imperialism.

As Morales left the podium, the socialist folk group Quilapayun's anthem, "El Pueblo Unido Jamás Será Vencido," an ode to martyred socialist Chilean president Salvador Allende, sounded from the speakers by the stage. Fireworks exploded above the plaza while groups of adolescents formed human pyramids to hoist red and black flags toward the sky. "The people united will never be defeated," the crowd chanted again and again.

Finally, Ortega stepped to the microphone, launching into a call-and-response chant against savage capitalism. Then, in an excruciatingly long speech that drove more than half the crowd from the plaza, he laid out his agenda, vowing to block privatization of Nicaragua's water, increase access to electricity for the country's poor and heighten economic cooperation with fellow left-leaning Latin American governments. He also took a dig at the right-wing Liberal Constitutional Party (PLC), which has ruled the country since his defeat in 1990. "Our agenda is unfinished," Ortega declared. "When we left the illiteracy rate was 13 percent. Today it is 35 percent."

The populist tenor of Ortega's inauguration ceremony presented a stark contrast to the strategy that propelled his campaign. On the campaign trail, Ortega worked assiduously to reassure the Nicaraguan public that the exhausting conflicts that accompanied his first presidency will not re-emerge. In stump speeches and campaign ads he repeated the word "reconciliacion" like a mantra, pledging no more land seizures, clashes with the church or blood-soaked battles with The Empire. Ortega's theme song, played over and over on pro-Sandinista radio stations during his campaign, was a hip-hop version of John Lennon's "Give Peace a Chance," with a lilting chorus highlighted by the line "Todos reunidos con reconciliación"--we all unite with reconciliation.

To ratify his image makeover, Ortega selected as his vice president Jaime Morales Carazo, a former contra leader whose home he had once seized. The Vatican's most important figure in Nicaragua, Cardinal Miguel Obando y Bravo, a fervent opponent of Ortega during the 1980s, has become one of his closest allies. With an eye on the $175 million Millennium Challenge grant for Nicaragua, approved before the election by the Bush Administration, Ortega has toned down his anti-American rhetoric. The day before his inauguration, he held court with Bush Administration Health and Human Services Secretary Michael Leavitt and US Ambassador Paul Trivelli, a hated figure in Nicaragua who has openly demonized Ortega. The new Daniel Ortega is a uniter, not a divider.

Though Ortega's brand of reconciliation helped usher the Sandinistas back into Nicaragua's presidential palace, his will to power may have sapped Sandinismo of its revolutionary soul. It's hard to know what the Sandinistas stand for anymore, Francisco Chamorro, assistant editor of the Nicaraguan daily Nuevo Diario and nephew of former Nicaraguan president Violetta Chamorro, told me. "They are a giant coalition now that is full of Liberals [members of the PLC], contras, everybody. And the whole party is based around Daniel Ortega and his family."

Ortega's dark pact with the right-wing PLC has dashed the idealism inspired by the original Sandinistas. In 1998, after his stepdaughter accused him of molesting her since the age of 11 (Ortega denied the charges while using his power in the National Assembly to block subsequent investigations), he sought protection from then-President Arnaldo Aleman, who was in the process of looting the treasury of $100 million. The two caudillos entered into "el Pacto," agreeing to grant each other immunity from criminal prosecution while lowering the percentage of the vote necessary to win a presidential election in the first round from 45 percent to 35 percent.