Hernando de Soto and the mystification of capital 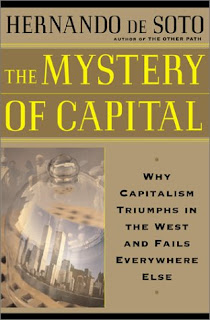 In a critique of Hernando de Soto's bestselling The Mystery of Capital: Why Capitalism Triumphs in the West and Fails Everywhere Else, Staffan Granér finds de Soto's methods unreliable and his theories over-simplified. De Soto claims that if "dead capital" were legalized, it would elevate the poor out of poverty. In reality, de Soto's formalization of the economy aims to protect rights of ownership and ease the way for free market transactions, not to create regulations and a social safety net. "By maintaining that poverty can be solved simply by giving all of the poor formal rights of ownership", says Granér, "de Soto pulls a mystifying veil over what are in fact real social discrepancies."

"Hernando de Soto's book The Mystery of Capital: Why Capitalism Triumphs in the West and Fails Everywhere Else has become something entirely unique: a bestseller from the field of Development Economics. Since the book first came out in 2000[1] in Spanish and English, it has been translated into at least nineteen other languages, including Arabic, Chinese, and Russian.[2] The book has often received gushing praise in the press, as witnessed in examples from such well-known newspapers and magazines as The Times: "No less than the blueprint for the new industrial revolution."; or The Economist: "The most intelligent book yet written about the current challenge of establishing capitalism in the developing world." In a review before publication, Sweden's largest daily newspaper wrote, "If there is any justice in the world, de Soto [will be] a clear candidate for the Nobel Prize in Economics."[3]

Several of the world's most prominent figures, such as Bill Clinton, Kofi Annan, George W. Bush, Margaret Thatcher, Mexico's Vicente Fox, and Egypt's Hosni Mubarek are in agreement with this panegyric. Even Luiz da Silva and his leftwing Brazilian administration refer to de Soto as the inspiration behind one of his more radical reform programmes.

Instituto Libertad y Democracia (ILD), the research institute in Lima founded and directed by de Soto, has been ranked as the world's second-most influential think tank, with assignments from the ILO, the UN, and some thirty governments in the Third World and former Soviet states.

Among academic economists and researchers in economic development, the reception has been less univocal. Prominent Nobel Prize recipients such as Ronald Coase and Milton Friedman chime in with the chorus of praise. Elsewhere, however, in less popular scientific publications, criticism and a demand for common sense and moderation has been expressed.

Even before I give an account of the primary features of the line of reasoning that has received this overwhelming political and media response, it may be appropriate to introduce some notion of why so many find de Soto's analysis appealing. He claims not only to have the answer to the question posed by the book's subtitle, but also offers a simple recipe for its solution, which does not demand much more than the good will of decision makers and legislators. Many earlier explanatory models have involved a number of ingredients, indigestible for many, which de Soto's analysis seems to be able to do without. First of all, de Soto's suggestions do not include any need for redistribution of wealth from privileged groups, or debt relief, whether on a global or a local level. Nor are the gaps between the world's nations and regions ascribed to any historical injustices or positions in an unequal economic world order. It is not market capitalism per se that lacks the ability to bring prosperity to poor countries. Market capitalism is – as de Soto often repeats – "the only game in town". The only thing necessary is to do away with the specific institutional factors that prevent capitalism in the Third World from developing to its full potential, as in the industrial and welfare states. Here de Soto aims his rhetorical weapon at what he views as the socialist and Marxist monopoly on representing the interests of the poor.
[4]

Second, de Soto explicitly distances himself from the old Weberian idea that poor people's ability to achieve prosperity and advancement is restricted by cultural dispositions and patterns of behaviour. People in developing countries are, de Soto claims, just as capable of innovation, creativity, and entrepreneurism as those in the West. The poor are not the problem; they are the solution".