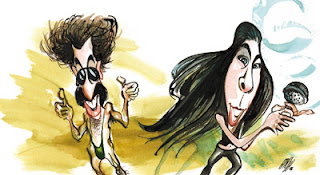 "Borat: Cultural Learnings of America for Make Benefit Glorious Nation of Kazakhstan— which opened to packed theatres and rave reviews across North America in November—is ostensibly a state-sponsored documentary for Kazakhs to learn about American culture. The film builds upon Borat’s previous appearances on HBO’s comedy Da Ali G Show. A hit in Britain, in North America Borat continues to be wildly popular, to the ire of the Kazakhstan government, which has long fought his misogynist, anti-Semitic and racist portrayal of Kazakh culture. (Though it appears the government has finally got the joke; Kazakhstan’s culture and information minister recently called the film “funny,” acknowledging that Americans are its real target.)

Nothing-is-sacred comedians like Cohen have long exploded these issues through parody, especially as discussions about stereotypes become more taboo in polite conversation. The popularity of comedians such as Margaret Cho, Dave Chappelle, Sarah Silverman and Canada’s Russell Peters reflects the fact that questions of difference, particularly race and cultural difference, fascinate us. Their acts are charged with ethnic humour about their own communities and others that is sure to offend. But is it racist?

While we can measure the immediate success of a joke by the laughter or catcalls it provokes, we can also consider the spontaneous reaction that a joke provokes as indicative of a deeper emotional landscape. Whether we find a joke funny, dirty, racist or just dumb depends on who is telling the joke, and to whom, especially when a comedian is parodying a racist character.

In Borat’s case, the joke is that he isn’t really an anti-Semite. Cohen, his creator, describes himself as an observant Jew. Talking to everyday Americans about patriotism, hunting, politics and dating, Borat’s enthusiastic curiosity, coupled with a dose of stupidity, makes his misogyny and anti-Semitism excusable—he is just a foreigner, after all, with different beliefs that must be tolerated. His ignorance of the inappropriateness of discussing the sexual prowess of his sister or asking how to defend himself against the “Jew claw attack” endears him to his fans".