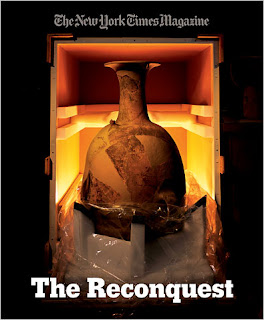 "Before being admitted to see Karp-Toledo on that morning in August 2002, Burger and Salazar were kept waiting for an hour and a half while she conferred with an anthropologist, Luis Lumbreras, who was well known to the Yale couple. A charismatic Marxist, Lumbreras was one of Salazar’s professors at San Marcos. He is an expert on pre-Inca Peruvian cultures, and is best known academically for his pioneering excavations of an ancient ceremonial capital, Chavín de Huantar. Burger later worked at the same site and published studies that discredited many of Lumbreras’s conclusions. Scholars can be as jealously territorial as nations when it comes to the proprietorship of cultural patrimony. Entering Karp-Toledo’s office, Burger and Salazar discovered with mild consternation that Lumbreras would be participating in the discussion. Soon after, the president himself appeared.

“During the meeting, Toledo came in and gave his opinion,” Burger said.

“It was the first time we saw him,” Salazar continued. “He said: ‘I saw the proposal, it’s great. When can I sign? I want to be at the opening of the exhibition.’ ”

After Toledo made his exuberant offer to travel to New Haven, there was an uneasy silence. Then his wife reprimanded him.

“That moment was embarrassing, for me as a Peruvian.”

“For me as a man it was embarrassing,” Burger said.

“He started to fix his tie,” Salazar went on.

“He said, ‘I have to go back to my cabinet meeting, I have left all cultural matters in Eliane’s hands,’ ” Burger recalled.

“It was very uncomfortable,” Burger said. “She said she wanted everything back. It was a question of legal repatriation.”

“Lumbreras began to give a history of Machu Picchu that was completely wrong,” Burger said. “He was saying that all of the material should have been returned in six months.” Evidently, Karp-Toledo was guided by his counsel.

“Eliane is a child of the ’60s, of Paris and Berkeley, of the rights of indigenous people,” Burger told me. “For her, meeting Lumbreras is like meeting the reincarnation of Che Guevara, the embodiment of the Latin American revolution.”

"At this point, the cultural-patrimony dispute between Peru and Yale began to resemble one of those bitter custody battles in which the adoptive parents painstakingly document how they have provided the child with a superior home while the birth parents, insisting that they never intended to give up their progeny permanently, seek recourse in the courts. In some ways, Peru’s claim against Yale mirrored the more famous bickering between the British Museum, which maintains that Lord Elgin rescued the Parthenon frieze from target practice and souvenir seekers, and the Greek government, which argues that a central treasure of its history was illegitimately seized while the country was under the colonial domination of the Ottoman Empire. The Peruvian case, however, featured a legal paper trail of documents"

"Historic relics have pragmatic value: politically, for purposes of national pride and partisan advantage; economically, for display to tourists, museumgoers, magazine readers and TV-program watchers; scientifically, as research material for scholars pursuing academic careers; and, most nakedly, as merchandise for dealers in antiquities. In comparing the arguments and motivations of the different claimants to the Yale collection, I often identified with historians of the Inca trying to untangle those Spanish chronicles that were spun from the tales of native informants with their own purposes. The people at Yale say that they have preserved the collection as a legacy of a great civilization and they want to continue to study these artifacts to learn more about that culture. They are also paying tribute to one of the most colorful and glamorous figures in the university’s history. The Peruvians celebrate their own legendary ancestor when they describe the urgency of their case, but they also have very down-to-earth political and commercial uses for the collection. “Cultural patrimony” — the phrase sounds so otherworldly. Bingham and Pachacuti were both very practical men. They would not have been fooled for a minute".