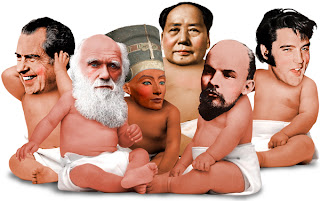 AS university students clashed with the police in this country last May, attention focused not just on their demands to hold elections without government meddling but also on the names of the two leaders organizing the protests: Nixon Moreno and Stalin González.

Many Venezuelans had a good laugh at the names and went on with their business. What’s so odd, after all, about the occasional Nixon or Stalin in a nation where bestowing bizarre names on newborns has become a whimsically colorful tradition?

A glance through a phone book or the government’s voter registry reveals names like Taj-Mahal Sánchez, Elvis Presley Gomez Morillo, Darwin Lenin Jimenez, even Hitler Eufemio Mayora. Other Venezuelan first names, which roll off the tongue about as easily in Spanish as in English, include Yusmairobis, Nefertitis, Yaxilany, Riubalkis, Debraska, as well as Yesaidú and Juan Jondre — transliterations of “Yes, I do” and “One hundred.”

What’s it like to have such a name? “I’m extremely proud,” said Mao Breznyer Pino Delgado, explaining how he had recently looked online at Wikipedia to read up on the men who inspired his names, Mao Zedong and the former Soviet leader Leonid Brezhnev, when he found an example of Mao’s signature. He said he learned a bit of calligraphy so he could sign his name in Chinese.

“My father was a political moderate but he admired the military accomplishments of the Red Army,” said Mr. Pino, 26, who works in advertising for a beach clothing company. When a Fidel Castro or Mao shows up on the electoral registry, Mr. Pino said, some people accuse allies of the leftwing president, Hugo Chávez, of stuffing the registry with false names. “But my name has been Mao since before Chávez,” Mr. Pino, a supporter of Mr. Chávez, said.

Venezuela is not the only country in Latin America, or elsewhere, with a creative approach to first names. Brazil is renowned for its abundance of Washingtons, Robsons and Wellingtons, which take on a musical resonance when pronounced in Portuguese. Honduras drew attention several years ago after babies with names like Llanta de Milagro (Miracle Tire) and Bujía (Spark Plug) turned up on the public birth registry.

But Venezuela’s interest in unusual names is especially robust. Naming is related somewhat to social class, with the upper crust loyal to names like Andrés, Miguel, Carolina or Patricia. Mr. Chávez’s government has numerous officials with colorful names, reflecting how Venezuela’s traditional political elite has been upended in recent years.

Chavistas include Iroshima Bravo, a congresswoman named after the Japanese city Hiroshima, and Diosdado Cabello, the governor of Miranda State, whose first name means “God given.” The National Assembly, controlled entirely by Chávez supporters, has an Earle, an Eddy, an Elvis, a Berkis Claret and a Jhonny Owee.

Cold war ideologies offered some inspiration to Venezuelan parents in decades past. Even today, a name or a political philosophy that might result in being ostracized elsewhere is no obstacle to a warm reception in Caracas. Mr. Chávez’s government has said, for instance, that it did not view Ilich Ramírez Sánchez, the Venezuelan-born assassin also known as Carlos the Jackal, as a terrorist. Mr. Chávez addressed Mr. Ramírez as “Dear Compatriot” in letters they exchanged.

Mr. Ramírez, linked to the kidnapping of 11 oil ministers at a 1975 OPEC meeting in Vienna and serving a life sentence in France for killing two French secret agents, was named in honor of Vladimir Ilich Ulyanov, or Lenin. His two brothers are Vladimir and Lenin, common Marxist-inspired names in Venezuela.

“It’s as if you’re more valued than someone else in this country if you have a foreign-sounding name,” said Samuel Hurtado, an anthropologist at the Central University of Venezuela who studies family structures.

“Venezuelans believe they should have privileged access to things that are imported,” Mr. Hurtado continued, explaining how unusual sounding names, often with an American or Russian twist, climbed in popularity during the oil boom of the 1970s when Venezuela was flush with cash for imports. “This thinking extends to the names parents give their children.”

While Venezuelan names can seem perplexing to outsiders, there are rules involved. Roberto Echeto, a novelist who compiled a list of unusual names after writing a column on the subject for El Nacional newspaper, points to practices like combining the names of a father and mother to produce, for instance, a son named Nelmar whose parents are Nelson and Marta.

Some parents simply reverse the spellings of names, creating Rotceh from Hector, Nabetse from Esteban, Susej from Jesús, Aleuzenev from Venezuela, or Anierim from Mi Reina (My Queen). Some rarer names on Mr. Echeto’s list, which often have a mock-American ring to them, include Willderman, Rosaherbalaif, Owinch, Petrasmit, Georguel and Yasterliski. He can add to that list Jhon Beiker (as in John Baker, a generic American-sounding name), christened as such by his mother Dosmel García and heralded by the local media as the first baby born in Caracas in 2007.

“Naming your child in Venezuela is an almost irresistible invitation to rebel against centuries of tradition,” Mr. Echeto said. “Politics used to influence naming, but now it’s become kind of random.”

Mr. Vargas, 33, said the middle name Sailing was inspired by an Arab princess who appeared in a comic book. Kleiderman was named in honor of Richard Clayderman (born Philippe Pagès), a French pianist whose renditions of popular music and French chansons are beloved in Venezuela. Klarth was similar to the name of a friend in Maracaibo who moved there from Trinidad and Tobago.

“The rest of the names just came to me in my dreams,” Mr. Vargas, a street vendor who sells hot dogs, said in an interview at his home, in an area where 24 families squatted illegally two years ago to build homes from tin siding and discarded pieces of wood. “Their names will make them special in this life.”
Posted by Martín Tanaka at 7:47 p. m.