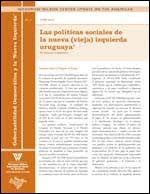 "The Latin American Program is pleased to share with you a new publication by Uruguayan political scientist Rosanna Castiglioni of the Universidad Diego Portales, Santiago, Chile.

This publication explores the social policies of Uruguayan President Tabaré Vázquez
(2005-2010) of the center-left Frente Amplio-Nueva Mayoría coalition. Uruguay’s economy went into deep crisis in the early years of this decade, partly as a result of Brazil’s 1999 currency devaluation the collapse of the Argentine economy in the second half of 2001. To reduce poverty, indigence, and inequality, the Vázquez government pursued a number of reforms in the areas of taxation, health care, education, and wage policy, among others. Social indicators gradually improved in the second half of the decade, no doubt contributing to the election of a second Frente Amplio government in 2010".