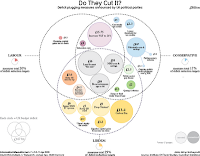 An obituary for the Third Way
The financial crisis and social democracy in Europe
Magnus Ryner
27.04.2010

The Third Way made a virtue out of the necessity to adapt classical social democracy to global market conditions, conjoining high finance with commodified forms of welfare provision. When the US system on which it was modelled collapsed, "modern" social democracy in Europe was in no state to offer an alternative, argues Magnus Ryner.

The financial crisis presents us with a political paradox. The contagion effect of the US sub-prime mortgage crisis damaged global financial markets so severely that the very institutional foundation of the world monetary system was cast into doubt. This was not only another speculative bubble that burst spectacularly (although it was that too). Given the highly complex packaging of financial products through processes of securitisation, it became impossible for buyers and sellers to sort out good debt from bad. Revelations about the balance sheets of the most iconic of "blue-chip" financial corporations generated an uncertainty in markets whose magnitude caused economic activity to seize up entirely. The destruction of values was such that even the most ardent of neoconservatives, such the former Secretary of the US Treasury Hank Paulson, were advocating massive nationalisations and state bailouts. It is hard to imaging a more damning indictment of the efficient market hypothesis, which had been the nodal point of decades of neoliberal policy prescriptions. Even the sturdiest of hegemonic discourses have difficulties surviving such dissonance.

Not surprisingly, the crisis raised questions about the possibility of a revival of social democracy. The financial crisis would seem to invite more tempered views about the market. The slogan associated with the Bad Godesberg Programme of 1959 captures the spirit of the time: "As much market as possible; as much planning as necessary." But here we encounter the paradox. Accompanying neoliberalism's loss of hegemonic aura is the absence of social democracy as an effective political agent. Social democratic parties were severely battered in the EU parliamentary elections of 2009. Notwithstanding recent success in the local elections, the French PS is a long way from the corridors of power. The Italian left is in a state of shambles. The German SPD, after suffering its worst election result of the post-war era, has been expelled to opposition. In the UK, the Tories – pioneers of financialisation and neoliberalism – look set to form the next government, their main opponents being the Liberal Democratic Party rather than Labour. Particularly telling is the state of affairs in Sweden – supposedly the most sturdy of social democratic citadels. Once again, a "bourgeois" coalition government has experienced an economic crisis during one of its rare tenures. This time around, however, the crisis has correlated with dramatic loss of support for the SAP, so that the conservative Moderate Party, which leads the coalition, now has a serious chance of becoming the majority party. This is almost without precedence in Swedish electoral history.

Social democracy's perhaps counter-intuitive failure as a political contender in the current conjuncture is no coincidence. Ephemeral factors such as uninspiring leadership or the cumulative effect of incumbency are not primarily to blame (although these factors are real enough and hardly helpful). The causes for the travails of European social democracy are longstanding and organically ideological. Insofar as the social democratic Third Way sought to conjoin high finance with increasingly commodified forms of welfare provision through retail finance, the economic crisis is also a crisis of social democracy. Modern European social democracy is so closely imbricated with the system in crisis that it is in no position to offer an alternative...

Information is Beautiful
Election 2010: Can they cut it? (The deficit, that is)
How do you save £167bn - what would each party do if they win the election? See how they compare (para entender la lógica de la construcción de coaliciones ver las áreas de interscción, al menos en el tema del déficit).