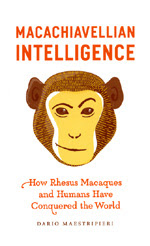 When it comes to their social behavior, people sometimes act like monkeys, or more specifically, like rhesus macaques, a type of monkey that shares with humans strong tendencies for nepotism and political maneuvering, according to research by Dario Maestripieri, an expert on primate behavior and an Associate Professor in Comparative Human Development and Evolutionary Biology at the University of Chicago.

“After humans, rhesus macaques are one of the most successful primate species on our planet; our Machiavellian intelligence may be one of the reasons for our success” wrote Maestripieri in his new book Macachiavellian Intelligence: How Rhesus Macaques and Humans Have Conquered the World.

Maestripieri has been studying monkeys for more than 20 years and has written extensively on their behavior. He has studied them in Europe, at a research center in Atlanta, and on an island in Puerto Rico, where researchers established a rhesus macaque colony for scientific and breeding purposes.

Rhesus macaques live in complex societies with strong dominance hierarchies and long-lasting social bonds between female relatives. Individuals constantly compete for high social status and the power that comes with it using ruthless aggression, nepotism, and complex political alliances. Sex, too, can be used for political purposes. The tactics used by monkeys to increase or maintain their power are not much different from those Machiavelli suggested political leaders use during the Renaissance.

Alpha males, who rule the 50 or so macaques in the troop, use threats and violence to hold on to the safest sleeping places, the best food, and access to the females in the group with whom they want to have sex. Like human dictators intent on holding power, dominant monkeys use frequent and unpredictable aggression as an effective form of intimidation. Less powerful members of the rhesus macaque group are marginalized and forced to live on the edges of the group’s area, where they are vulnerable to predator attacks. They must wait for the others to eat first and then have the leftovers; they have sex only when the dominant monkeys are not looking.

“In rhesus society, dominants always travel in business class and subordinates in economy, and if the flight is overbooked, it’s the subordinates who get bumped off the plane,” Maestripieri said. “Social status can make the difference between life and death in human societies too,” he pointed out. In the wake of Hurricane Katrina, for instance, the poorer members of the community accounted for most of the hurricane’s death toll.

Male macaques form alliances with more powerful individuals, and take part in scapegoating on the lower end of the hierarchy, a Machiavellian strategy that a mid-ranking monkey can use when under attack from a higher-ranking one. Altruism is rare and, in most cases, only a form of nepotistic behavior. Mothers help their daughters achieve a status similar to their own and to maintain it throughout their lives. Females act in Machiavellian ways also when it comes to reproduction. They make sure they have lots of sex with the alpha male to increase the chances he will protect their newborn infant from other monkeys 6 months later.

“But while they have lots of sex with the alpha male and make him think he’s going to be the father of their baby, the females also have sex with all the other males in the group behind the alpha male’s back,” Maestripieri said. They do so just in case the alpha male is sterile or he dies or loses his power before the baby is born.

Struggles for power within a group sometimes culminate in a revolution, in which all members of the most dominant family are suddenly attacked by entire families of subordinates. These revolutions result in drastic changes in the structure of power within rhesus societies, not unlike those occurring following human revolutions. There is one situation, however, in which all of the well-established social structure evaporates: when a group of rhesus macaques confronts another one and monkey warfare begins. Rhesus macaques dislike strangers and will viciously attack their own image in a mirror, thinking it’s a stranger threatening them. When warfare begins, “Even a low-ranking rhesus loner becomes an instant patriot. Every drop of xenophobia in rhesus blood is transformed into fuel for battle,” Maestripieri wrote.

“What rhesus macaques and humans may have in common is that many of their psychological and behavioral dispositions have been shaped by intense competition between individuals and groups during the evolutionary history of these species” Maestripieri said. Rhesus groups can function like armies, and this may explain why these monkeys have been so successful in the competition with other primates.

Pressure to find Machiavellian solutions to social problems may also have led to the evolution of larger human brains.

“Our Machiavellian intelligence is not something we can be proud of, but it may be the secret of our success. If it contributed to the evolution of our large brains and complex cognitive skills, it also contributed to the evolution of our ability to engage in noble spiritual and intellectual activities, including our love and compassion for other people”, Maestripieri said".