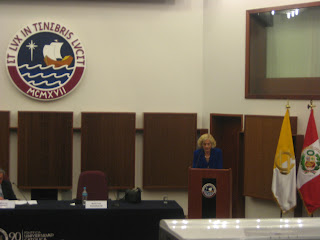 "My question was, focusing now on the role of the humanities and the social sciences (because I think other people can talk better than I can about the science part), what should that involve? I argued that there were three abilities above all that we need to cultivate to be adequate citizens of this very interlocking and complicated world. The first is the Socratic one: the ability to examine your own beliefs and ask what are your reasons for believing what you believe. That's essential for reasoned public culture, for a culture where it's not just sound-bites on talk radio, but it's serious deliberation and reasoned debate.

Then, learning about other countries, the whole "citizen of the world" part, which means a lot more knowledge than people used to get, than I got, about non-Western cultures. I want to include in that the knowledge of at least one foreign language, because even if it's, let's say, French or Italian, you still learn from that how another group of people sees the world and how difficult it is to translate that so neatly into your own language. I also think you need to learn about minorities in your own country, so I devote some time to women's studies, African-American studies, studies of human sexuality.

Then the third one, which goes closely with the second, is the cultivation of the imagination. It's not enough (although you have to do it), to learn historical facts and facts about economics. You need to be able to think what it might be like to be in a position different from your own so that the arts, not just literature but also drama, also dance, music -- these have a big role in cultivating the sort of person who's prepared to go out into the world and think well about these problems".